Strong storms pounded the Deep South on Sunday, killing more than two dozen people, including at least 11 people in south Mississippi and damaging up to 300 homes and other buildings in northern Louisiana.

Storms continued to batter the South overnight, with much of the region under flash flood, tornado and thunderstorm warnings and watches into Monday morning. At least 72,000 are without power.

Mississippi Emergency Management Agency director Greg Michel said one person killed was in Walthall County, two were killed in Lawrence County, and three were killed in Jefferson Davis County. All three counties are more than an hour’s drive south of Jackson, near the Louisiana state line.

“Robert was a United States Marine Corps veteran and a long time employee here,” the sheriff’s office said in a statement.

“Robert left this world a hero, as he shielded Mrs Paula during the tornado. He was a very valuable employee and will be greatly missed.”

The sheriff’s office asked locals to remember the family in their prayers following the tragedy.

Soso, Mississippi was also hit, causing some to seek shelter in public buildings.

Candice Pitts hunkered down in a hallway at the local volunteer firefighters station.

“All I had was my arms to put over my son and mother-in-law,” Candice Pitts told CNN. “Was near a solid glass door that blew out and the roof in many places tore off or collapsed. My car was park[ed] under a shed that is now blown over in a yard nearby. It’s mangled.”

In a video being shared on Twitter, a crying woman is heard describing the damage as the video pans across debris.

“It just wiped everything out around me,” the woman said.

While Mississippi and Louisiana saw the majority of damage, the storm system’s effects were felt througout the southern part of the US.

Local media in Georgia showed a house that had been moved to the centre of a road by the storm’s strength.

WOW! Channel 2’s @tomreganWSB found this house IN THE MIDDLE OF THE ROAD after severe storms moved through Upson County: https://2wsb.tv/2Vr64V5 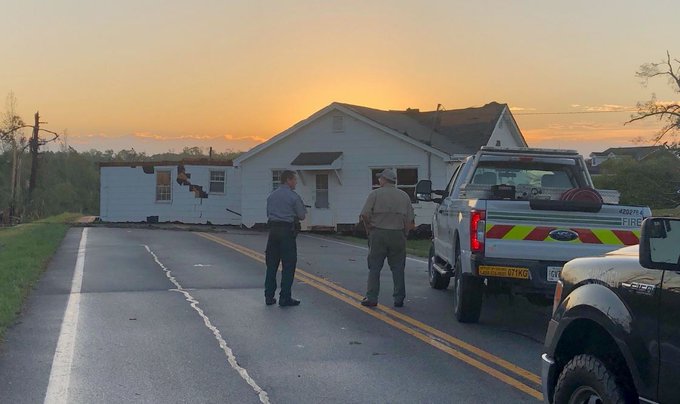 418 people are talking about this

Authorities were still surveying total damage on Monday morning, shedding light on the devastating circumstances faced by those who weathered the storms.

A 34-year-old man was killed by a falling tree while sleeping in his bed, according to a journalist based in Atlanta, the state’s capital.

Here’s another picture of the tree that fell on the Cartersville home killing a 34 year old man sleeping in his bed early this morning. Details at noon on Channel 2 Action News. 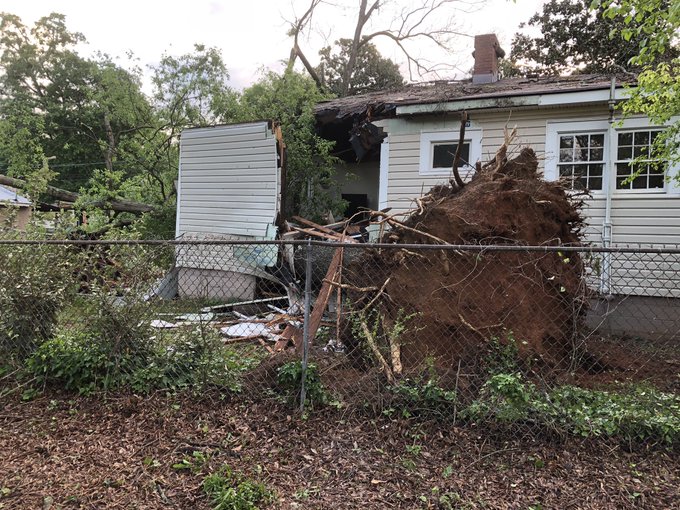 23 people are talking about this

Photos from Alabama showing widespread damage in rural areas began appearing on social media. Carbon Hill, a city of about 2,000 people, awoke to widespread damage they say mirrored a deadly tornado from 2002. 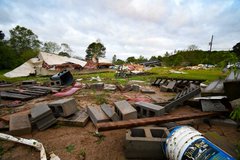 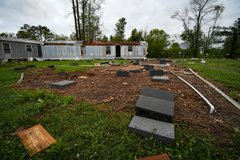 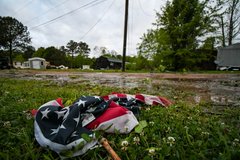 57 people are talking about this

Back in Mississippi, authorities are working to deliver aid amid the challenges brought on by the need for social distancing as the coronavirus pandemiccontinues.

Mississippi Governor Tate Reeves declared a state of emergency on Sunday night after he said several tornadoes had struck the state.

“This is not how anyone wants to celebrate Easter,” Reeves said on Twitter. “As we reflect on the death and resurrection on this Easter Sunday, we have faith that we will all rise together.”